Flexxible|SUITE Platinum and Platinum Multitenant (but not Enterprise) products allow changing the CPU and RAM values for a VM. The user will be able to easy check and update these values in the persistent and in the customizable desktop types and in the servers.

For version 4.1 or higher, this feature supports the modification of the CPU and RAM reservation and limits on servers running in VMware environments.

To change the RAM and/or CPU VM configuration, the user should select a VM of the list:

Then he needs to access the detail screen and click in the "Settings" button (toothed wheel icon),

to display the selected VM settings:

This screen allows to:

If the VM type is server and the environment hypervisor is VMware, the user is also allowed to edit the CPU and RAM reservations and limits: 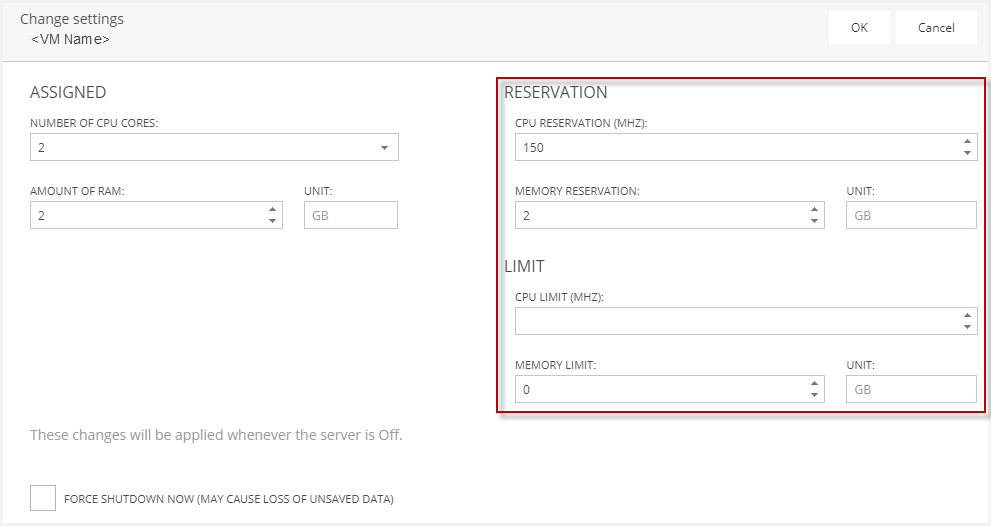 Flexxible|SUITE allows this feature only for the "Administrator" role (by default).

Next, we will describe each section.

This section shows the number of CPU cores and the amount of RAM currently assigned to this VM.

The user is permitted to change these values, with some limitations depending on the VM type:

Flexxible|SUITE will validate these values when the user clicks on the "OK" button. 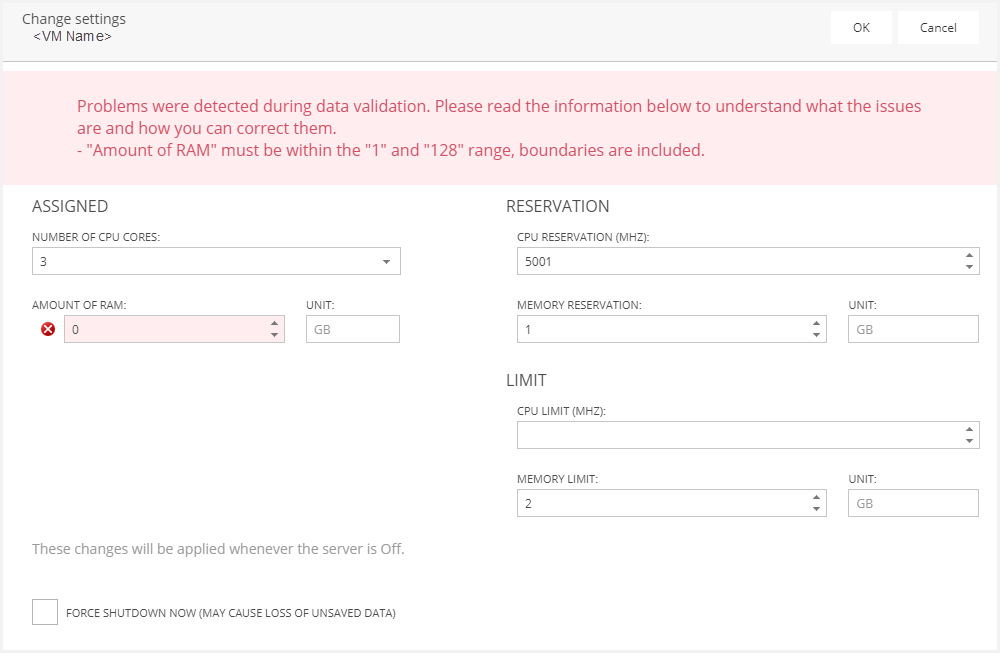 This feature is only available for those servers running on VMware.

The CPU and memory reservation ensures allocating the number of resources to the VM and their assignment at that time. This is a guarantee on either CPU or memory for a virtual machine. In case of CPU reservation, this is about the total sum of MHz of the physical processors of the host where the virtual machine is running.

When the user clicks on the OK button, Flexxible|SUITE will display a message indicating that a job has been enqueued to process the changes. 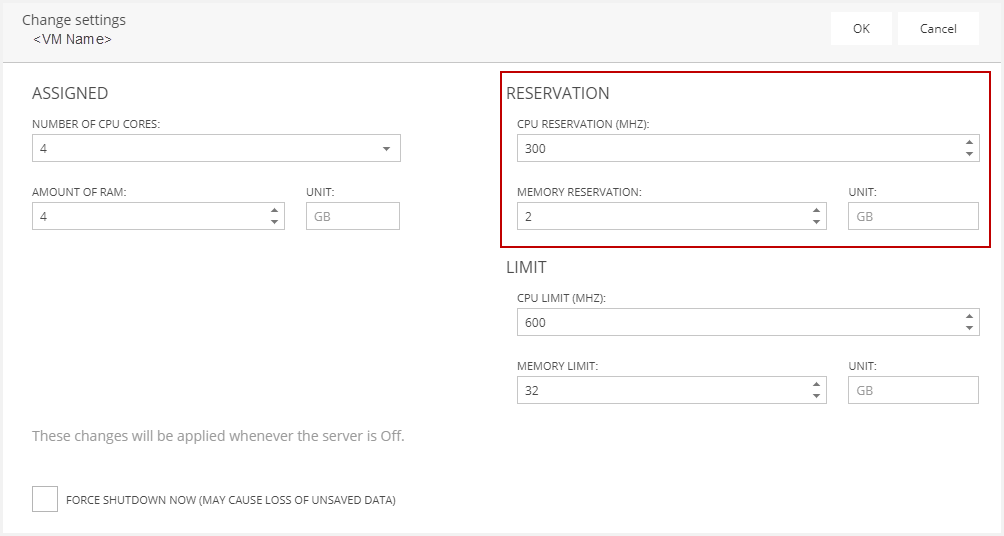 This feature is only available for those servers running on VMware.

The limit indicates the extent to which the resources (memory and CPU usage) of the VM can be increased according to demand.  If no limits are specified, the limit would be the maximum memory capacity and MHz of CPU of the physical host where the VM is running.

In Flexxible|SUITE, the user can change the CPU limit in MHz and the memory limit in GB. These values are limited:

The CPU or RAM reservation is set to "Unlimited" using 0. 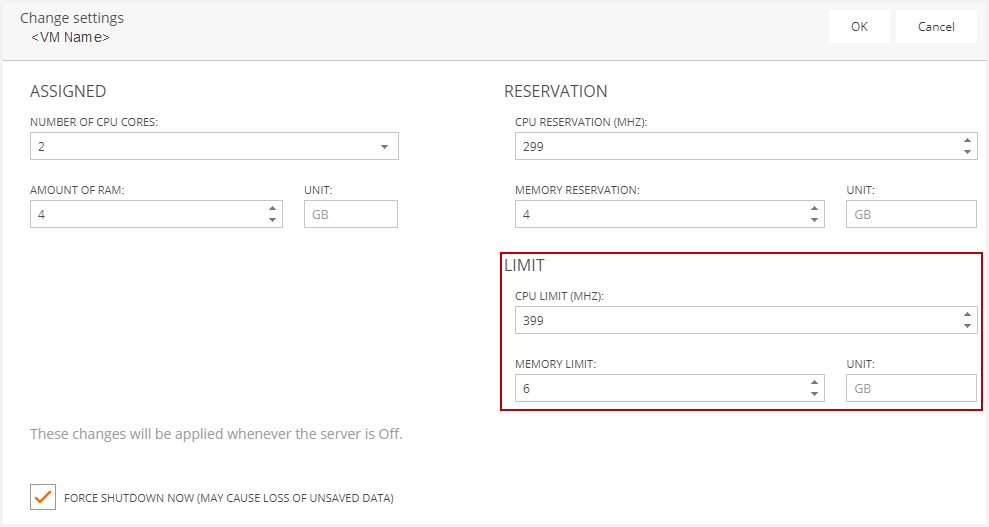 When the user clicks on the "OK" button, Flexxible|SUITE will display a message indicating that a job has been enqueued to process the changes.

After creating the job to process the changes, and if the "Force shutdown" checkbox is unmarked, the job remains on hold until the virtual machine is turned off, at which point Flexxible|SUITE starts the job. If the box is checked, an orderly shutdown of the VM is ordered, and then the job will be processed.

Flexxible|SUITE will show one of the following messages depending on the "Force Shutdown Now" checkbox value:

Finally, when the user clicks on the "OK" button, it will generate a job. There are three possible scenarios:

On the other hand, the user can audit the changes made in a VM through the job.

If the user accesses to the job detail, he can see more information about the "DesktopOperation.ChangeResources" method. 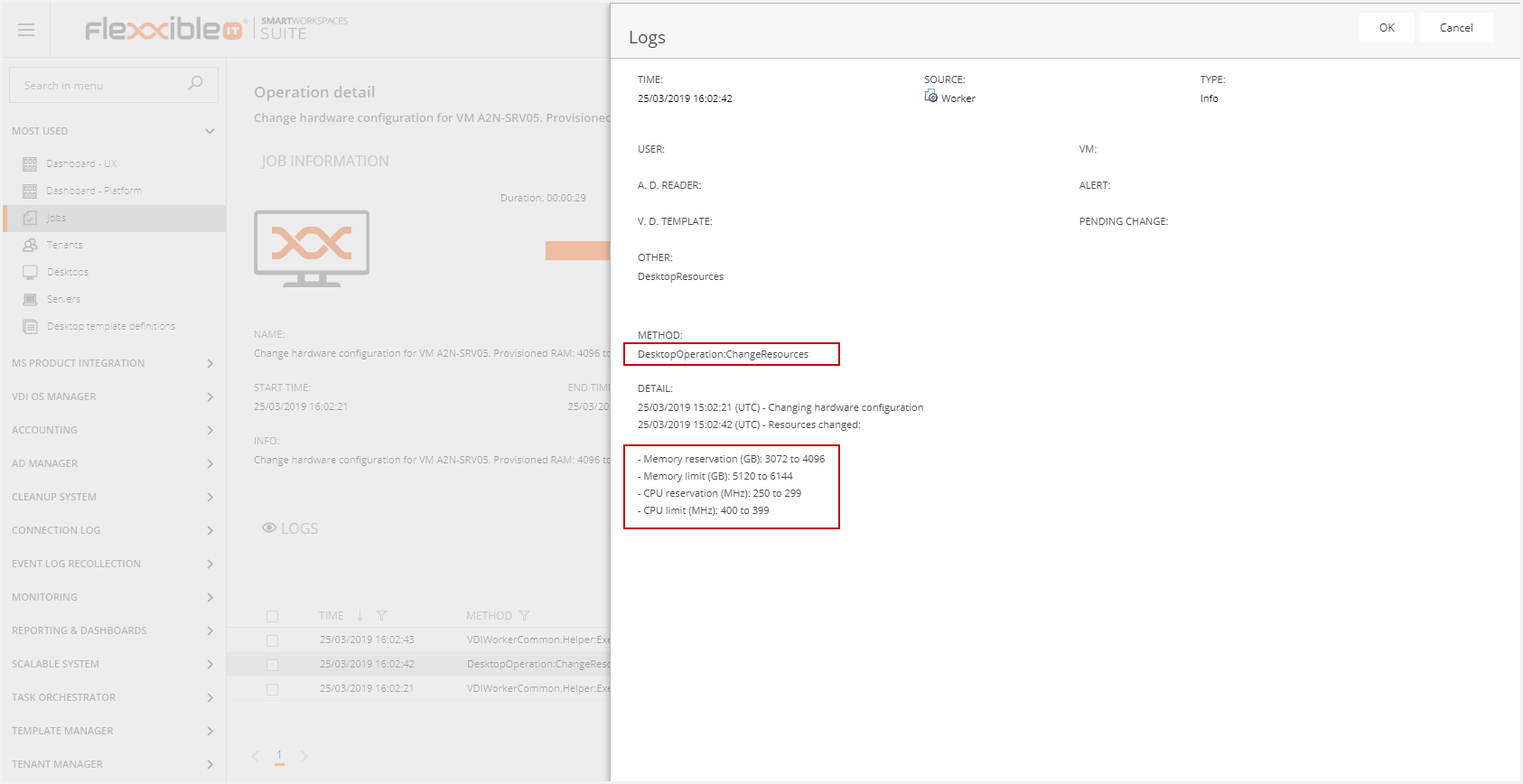 This job contains info about the previous and the current value for each modified field.

Once it is successfully completed, the user may check this hardware upgrade both in the "Desktop details" screen and in the desktop "Task Manager" itself: 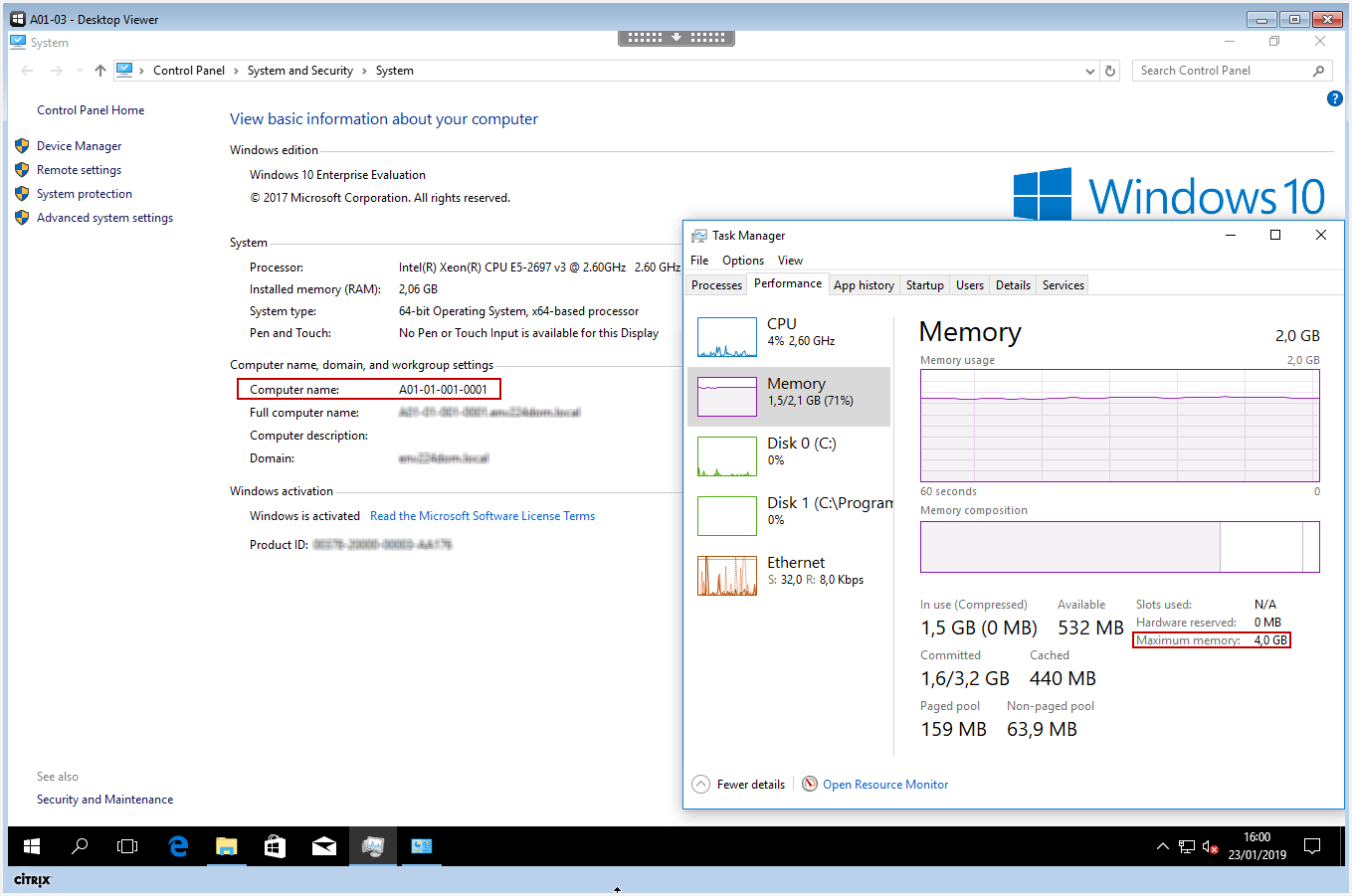 Fault Tolerance must be disabled to apply these changes. If the user tries to access the settings while having this feature enabled, then Flexxible|SUITE will display the following message: