Settings for creating templates for desktops and app servers

Configurations needed to enable the creation of templates for desktops & AppServers

Virtual machines can now be created automatically by Flexxible|SUITE by using a Windows ISO image and other installable. These VMs may be:

This article describes the required settings to enable the VM creation in Flexxible|Platinum Appliance and Flexxible|Enterprise Appliance.

In case the Flexxible IT appliance is selected as a container for the new VM, three paths are needed to be specified In the "VDI appliance" details screen, to set up the storage for the new servers or templates created by Flexxible|SUITE:

These paths may have different formats:

To assess which VDI appliance will store a new virtual machine (server or template), Flexxible|SUITE will use an algorithm. If a VDI appliance does not have a VM type storage path specified, it will be discarded to host the new VMs of that type. E.g. If the storage path isn't set for servers, a new server won't' be stored in that appliance.

Administrator users can see the selected HA hypervisor as a destination for the VM and to change it.

This is the path were temporary files are stored during VM creation. It can be a UNC path (DFS is not recommended) or a local path to the worker machines that create the VMs.

Whenever possible, using a local path offers better performance and reduces chances of failures due to network communications.

Once the VM has been correctly created, the files in this path a deleted. If the creation fails, the files are preserved for a couple of hours, to help you diagnose the problem.

Settings that control the location algorithm for the new VMs

The algorithm considers the best HA hypervisor for locating the new VM to be whichever has the most CPU, RAM and storage resources available. To do this, it assesses the average CPU and RAM usage according to the VDI OS Manager log.

The HA hypervisors based on Windows 2008 R2 are excluded, as they do not support PowerShell, as well as some others that do not meet some minimum available resources.

These required resources are indicated by some settings in Flexxible|SUITE: 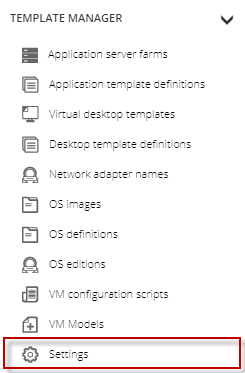 An overall score is calculated using these three factors and the HA hypervisor with the highest value is selected.

CPU, RAM, and storage are weighted so that the CPU is given the most importance, then RAM and finally storage. This weighting is based on the assumption that the lack of process capability (available CPU and RAM) highly affects performance and user experience. 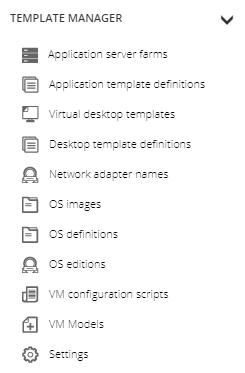 This table contains the name given to the default network adapter when installing a particular Windows version and edition for a language. This information is required to configure the adapter during VM creation.

Although new records can be added to this table, it contains one for each version and edition of Windows (from Windows 7/Server 2008 to Windows 10/Server 2016) in any language.

Although new OS definitions can be created in Flexxible|SUITE, the definitions for all versions of Windows (from Windows 7/Server 2008 to Windows 10/Server 2016) are supplied in any language.

It provides the edition of each operating system and contains data such:

Each OS edition refers to an OS definition, meaning that several OS editions may refer to a single OS: 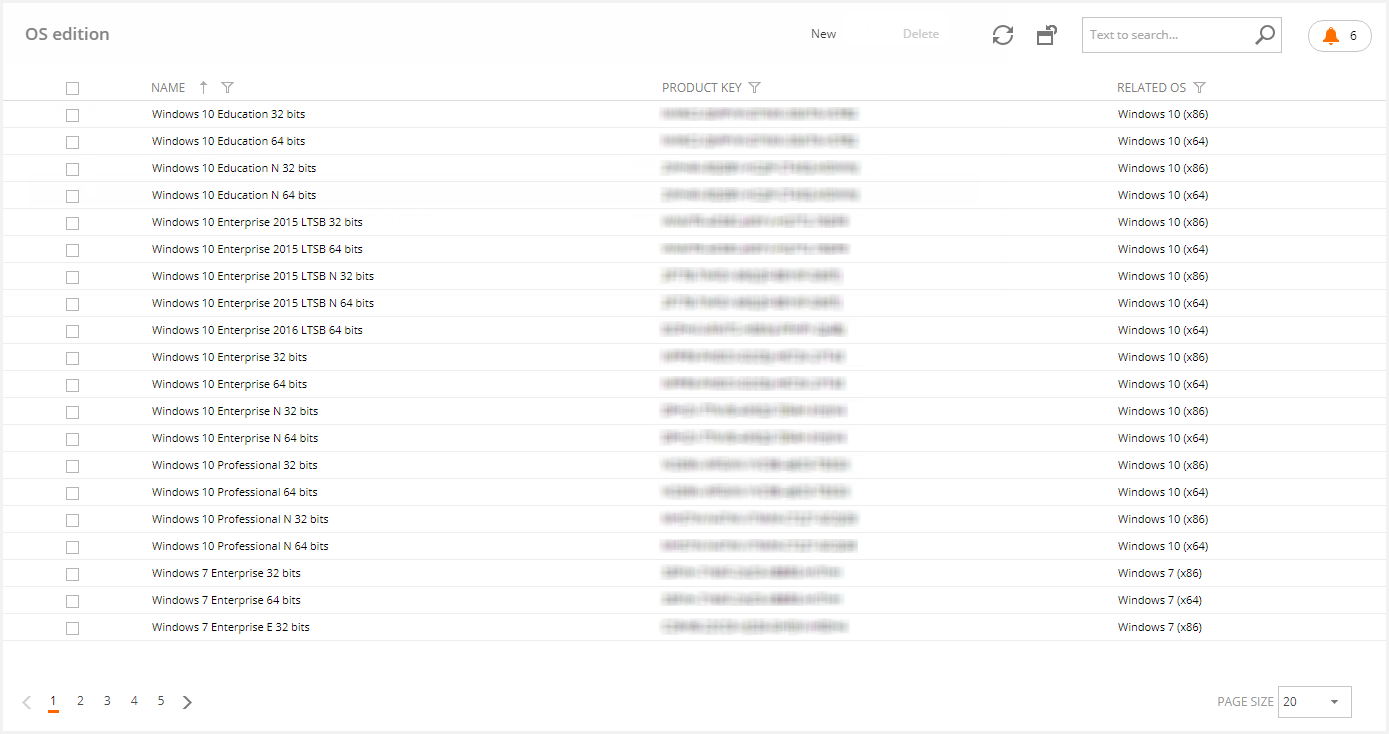 Although new OS editions can be created, all the Windows ones (from Windows 7/Server 2008 to Windows 10/Server 2016) are supplied.

This gives information on an OS ISO image, which includes:

An OS image must be created for each ".ISO" file that will be used to create the VM or several may be used referring to the same file if it is a multi-edition ISO.

The synchronize infrastructure process, which is automatically and periodically run in VDI OS Manager, it checks that the ".ISO" files referred by the OS images are found at the indicated path. In case eight hours after it started no ".ISO" file is found, an email notification will be sent to the set accounts in the “HA_AlertRecipientTo” setting.

To avoid unnecessary costs, in regards to the processes and time to update Windows each time a new VM is created, Flexxible|SUITE assumes that Windows updates are already installed in the ".ISO" file.

To install Windows updates in an ".ISO" file, please follow the procedure given in Creating a Windows image with updates.

These PowerShell scripts are used to configure new VMs, once Windows is installed. Or to install additional components, such as .NET Framework, VDI ClientService or Citrix Virtual Desktop Agent.

Each script is linked to the applicable OS definition. E.g. The script that installs the server VDA will only apply to the server type operating systems, not desktop.

Some configuration scripts may cause the VM to reboot, in which case the “c:\temp\VM_Setup.ps1” script will be run again until all the configurations have been completed and the end of the script is reached. At this point, the script programming will be deleted on reboot.

When creating a new VM configuration script, a script “skeleton” should be followed. Each script first checks to see whether the setting or component has already been installed or configured. If not, the script installs and configures it.

A list of the most necessary scripts is supplied by default (marked as “Is default”). These scripts cannot be modified. Although it is possible to develop new scripts for any necessary functionality or configuration. These scripts use installable, that should be located in "[ResourcesUNCPath] \Clients\scripts\UpdateVDA\Resources\Packages". E.g. They can be copied to the path "\\Sd.local\resources\Clients\scripts\UpdateVDA\Resources\Packages" by extracting them from the Packages.zip file, which is located on the drive ("VDI Appliance/Versions/3.1").

A VM model is like a pattern used to create the same type of VM repeatedly, with no need to specify all the features each time. For instance, a VM model can be defined to create a particular file server and then create some file servers for different Tenants from that VM model; or a server VM model for Office applications that can be used to create application template definitions for several tenants.

List of additional disks (besides the C: system disk) to be created for the new VM. Please specify the drive letter, volume label, and size (values between 1 and 500 GB).

Default port groups that will be opened in the Windows firewall of the new VM. New inbound rule groups can be defined, but bear in mind that the Group Name may vary depending on the Windows version and language, so they are configured with an expression like “@FirewallAPI:dll,-34251”.

To find the group name, please enable the firewall group in a Windows version similar to the new VM one (same version and language) and then use the following PowerShell command to view the enabled groups by showing the Group Name:

For Windows 7 or Windows 2008, which do not support cmdLet Get-NetFirewWallRule, the same list can be viewed in the following Windows registry key:

Please, keep in mind that the opening of firewall ports (inbound rules and inbound groups) applies when the VM has already been created and Windows installed, at the end of the VM creation process. If the installation or configuration of Windows or some other component requires some open ports, they must be configured via GPO. E.g. Windows Remote Management ports must be opened via GPO, to be applied immediately after booting up the VM for the first time, so that the machine creation can be completed successfully.

Only visible for templates (desktop or application):