The solution and its deployment options

Flexxible|SUITE is a software solution made up of more than twenty modules. The solution runs over the infrastructure components and manages them centrally avoiding uncontrolled access to the different elements of the customer infrastructure.

Support for XenDesktop and XenApp starts in version 5.6

Several different integration processes are supported by the customer active directory domains, among them: 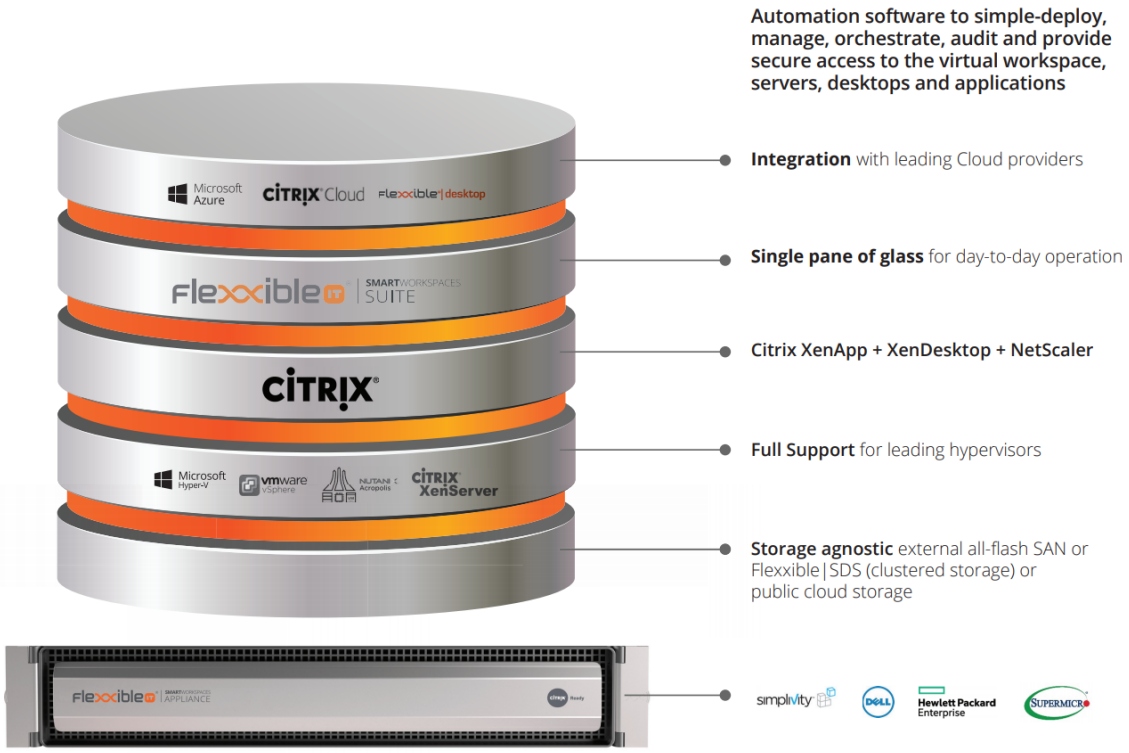 It acts as a single administration point through a web console, that provides an end to end automated and orchestrated administration for Apps, SDI and VDI. Some of its benefits are:

This is the module in charge of managing the horizontal growth of the VDI Flexxible System-based environments. It includes the IOPS within each VDI device. It is also responsible for deploying all versions of Templates in the different VDI Appliances chosen by the system administrators.

This is a fundamental part of the System. It's in charge of managing all the interactions of the departments that administer the VDI platform and the support technicians in a queue system designed specifically for VDI.

Flexxible VDI OS itself launches maintenance tasks and supervision of the queues. There are a total of twelve specialized queues, some work paralleling the tasks and others sequencing the tasks in FIFO order.

This is an easy administration Web-based console that centralizes the Flexxible VDI OS management. Design for the implicated technicians and helpdesks, involved work the 95% of their tasks within this module instead of accessing the low-level systems.

Under the umbrella of VDI OS Manager, practically all the systems that Flexxible VDI System incorporates are managed. The other 5% is carried out at a lower level by expert technicians from the Integrator (after certification by Flexxible IT). With a new "responsive web" graphic interface and improvements in usability and permissions for the different support levels L0, L0,5, L1, and L2.

Flexxible|SDS proportional to the set of Flexxible|VDI System the possibility of clustering the storage of your VDI Appliances, generating storage and global with the redundant virtual machines and desktops twice and being able to create storage availability groups between several local or remote locations of little distance. Unlike other systems, the overall storage performance improves as more VDI Appliances are added. To activate this functionality, a minimum of three VDI Appliances is required.

All this following the structure company (1..N) -> Division (1..N) -> Department, being able to delegate the administration at the Department or Division level.

Provides important news about templates management (know as images or templates), from the automated provisioning with Windows 7, Windows 10, Windows 2008 R2 y Windows 2012 R2 to its first edition. Going through the installation of the chosen VDA, pointing to the farm also chosen, and with the patch of updates made.

This is an exclusive tool for VDI systems that includes all the necessary alerts for VDI system management. These are some examples of alerts:

This tool determines the quality of the connection from the user's access point to the virtual desktop. Helps to solve possible communication problems between the remote user and his virtual desktop, communicating in a completely automatic way the results of the test to the technical support team.

This is an agent that monitoring the virtual desktop performance and allows the user and the administrator to know the tasks and resources information.

Allows performing support processes from VDI OS Manager. This agent replaces the Windows Task Manager to facilitate the application supervision and helps the user not to break any system processes. It is responsible for contemplating and repairing more cases of "non-registered" and improves the alert system.

This tool is an essential element in any VDI platform, which incorporates a completely new Flexxible VDI OS. Proactively, monitors the physical and logical elements of the entire VDI platform.

Going beyond a pure ping is responsible for making deep checks of third-party systems incorporated into the solution. Report possible problems to administrators and, in addition, try to recover from them automatically.

This module provides the automated management of the entire Citrix environment, both for the provision of new templates and applications and for their administration and updating. Counting on the Flexxible|Elastic System functionality that is responsible for creating the infrastructure of Flexxible|Server for hypervisor servers needed to meet the changing demand of companies. It is integrated with existing farms with a minimum of requisites, pending the hypervisor product. It also allows the deployment of persistent and customizable applications installed in Flexxible|Desktops.

Provides an audit trail of connections to the Flexxible VDI System platform. This data can be viewed online in Flexxible|VDI OS Manager or exported to basic office applications to have control of users accessing the infrastructure.

This module generates and manages the contingency environment when a user "breaks" their desktop and needs another to work urgently. It is usually used for critical users or environments. The user can start a contingency desktop with the corporate applications (without the personal ones) and their data, documents, and profile.

Can be launched unified queries on all errors in the VDI event viewers, since this information is centralized in the Flexxible VDI OS database.

It's weekly scheduled without any effect for users. Its objective is to keep the VDI infrastructure clean of historical and testing.

Allows updating in a simple way all the Flexxible VDI System components to the latest certified version tested by Flexxible IT.

This is the web application that the end-user uses to connect to his virtual desktop. This stool, accessible from anywhere in a completely secure way, is customizable for each organization, in such a way that the branding and corporate brand image is visible to all users from the first moment.

Records at all times the resources usage of each Department, Division and Company, facilitating the control of costs for each of these elements of the organizational structure. Logs the used desktops, templates, servers and storage resources. It is possible to export this information with customized formats.

It consists of a set of programs that allow the programming of backup copies of user documents and their recovery. This agent is integrated with the Microsoft VSS system for copying open files. The copy of the information is made using the Zero-Knowledge philosophy, which guarantees that this information can not be deciphered without a password that only the user knows.