AD requirements and types of integration

To make this implementation easier and satisfy the Active Directory requirements, all the components will be hosted into an organizational unit(OU), provided by the customer. It must be used for the solution implementation exclusively.

Integrate with an Existing Active Directory

When you choose to integrate your AD domain into the deployment, a series of changes are made in your domain controller to integrate it into the automatic orchestration process.

During the domain integration process, a trust relationship will be created between the domain of the resource, so both domains will be visible from Flexxible|SUITE:

Also, some requirements must be met, such as:

The following tables show the users and groups whose creation is required. Users and specific groups of Flexxible|SUITE can be created in any OU, although we recommend creating them into OU=FlexxibleIT,DC=YourDomain 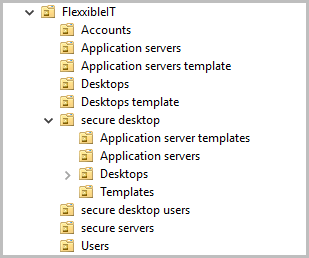 Flexxible|SUITE in multitenant environments will create the same structure for secure desktop, secure desktop users, and secure servers, using the tenant code as base OU: 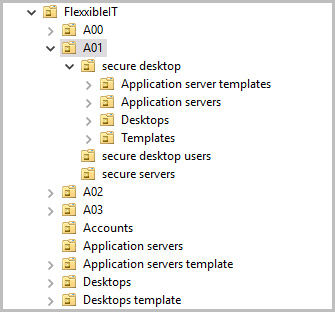 Regarding the OUs created within the infrastructure domain, the OU tree would look like the one shown below:

The roles and permissions to be granted, are described in the following table:

The import of multiple Host directives must be requested to ensure the correct performance of the VDI OS and its relationship to some specific OUs (assuming these OUs have been created in the VDI OS OU).

An OU must be requested to host all the domain objects used by the Flexxible|SUITE:

The OU may not depend on the domain root, but it is recommendable to activate the "Block inheritance" option to no accidentally apply GPOs defined over, except if they have been intentionally marked as "enforce".

We must request the Managed Service Accounts we need to use as the identity of the VDI OS services in each one of our infrastructure machines. The proposed account names along with the names of the machines where they should be installed and the roles they play are indicated in the following table:

It is recommendable that the names of the MSA accounts include the "MSA" prefix and the name of the corresponding infrastructure server. For example, for the DB01 server, the account name would be MSADB01$.

Note: this applies to VMWare only.

Detailed for each Hypervisor (if applicable).

The group is made for the Managed Service Accounts of the VDI OS services in the created OU for VDI OS. For this reason, the group must:

The application parameter “AD Accounts/VDIOSServicesGroup” should be informed with the pattern "DOMAIN\GroupName" defined for this group.

Detailed for each Hypervisor (if applicable).

The user groups to be created are:

These groups should be included in VDI OS parameters, group "User policies" and also in the VDI OS domain properties.

In this case, during the domain integration process, a trust relationship is not needed between the resource domain. Also, all the objects or items involved such as Groups, GPOs, OUs, etc are included in the client domain. Therefore, the client can customize the Groups and the OUs. Apart from that, we should follow the same process we did for the integration with an Active Directory, which has already been illustrated in this article.

When a tenant is created and initialized, the following OU structure is generated. 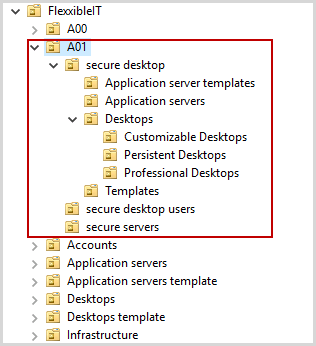 For the proper functioning of Flexxible|SUITE, the followings accounts must have these permissions on the FlexxibleIT base OU (and descendants):

The followings accounts must have reading permissions on the tenant base OU (and descendants):